Success at COP26 will be “Touch and Go”, say British officials

For months, British Prime Minister Boris Johnson and his aides have raised expectations ahead of the 2021 UN climate conference, also known as COP26, which they will host in Glasgow. But on the way into the two-week gathering, they have sounded much less confident.

In Rome at the G-20 summit on Saturday, Johnson said that the chances of a sufficiently large agreement from COP26, one that can really hold back global warming, were not much better than 50-50.

At Monday’s opening ceremony for the critical climate change talks, Johnson warned other leaders from nearly 200 countries that humanity “has long since run the clock on climate change” and warned that if we are not serious today, “it will be too late for our children to do it tomorrow. “

Earlier, his foreign minister, Liz Truss, said there was no guarantee that anyone would see the action required by global leaders. It is “touch and go”, she said, and there will be “really intense negotiations” between the leaders in the coming days. The summit represents a “great opportunity” to “hold these leaders accountable”, she added.

A few months ago, Johnson, who by nature prefers the role of optimistic booster, seemed much happier about the prospects for COP26, and spoke lightly about how Britain will use the COP26 presidency “to stimulate ambitious global action on climate change.” But British ministers and officials now acknowledge that it is uncertain whether the UK as host will be able to secure the agreements sufficiently to curb irreversible climate change at COP26.

Under the Paris Agreement on Climate Change concluded at COP21, nations agreed on the need to limit warming to two degrees and preferably 1.5 above pre-industrial levels. It allowed them to develop their own action plans and review them every five years.

In Glasgow, the top participants will formally review the action plans and evaluate how successful they have been.

The review will most likely highlight nations that have fallen far short of their commitments and goals and that sober assessment is partly the basis for Johnson’s uncharacteristic gloom ahead of COP26, British officials say.

While noting that whatever has been agreed in Glasgow “will never be enough to satisfy climate activists”, The Times of London wrote on Sunday: “You can almost hear the thumping of expectations, such is the force by which they are lowered. COP26 climate. Top. “

One source of concern is the absence of two key global leaders. Chinese President Xi Jinping, the leader of the world’s largest greenhouse gas emitter, is not coming in person. Nor does Vladimir Putin from Russia, another major polluter. 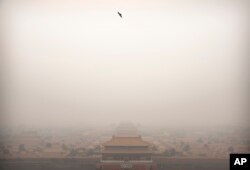 FILE – A bird flies over the Forbidden City on a day of high levels of air pollution in Beijing, China, January 18, 2020.

Turkey’s Recep Tayyip Erdogan, who had been listed among the global leaders expected to speak at Monday’s conference, withdrew at the last minute and returned to Turkey from the G-20 summit in Rome instead of going to Glasgow for no reason. for his unplanned return, according to Turkey’s state-owned news agency Anadolu. Later, a dispute was cited about security arrangements by assistants for his absence.

But the biggest source of alarm is the scale of the challenge and the enormous scale of the measures that need to be taken to curb the rise in temperature. “COP26 is a critical summit for global climate action,” said Anna Åberg, a research analyst at Britain’s Chatham House.

To have a chance of limiting global warming to 1.5 degrees, global emissions must be halved by 2030 and reach “net zero” by 2050. The 2021 report from the Intergovernmental Panel on Climate Change (IPCC) emphasizes that it is still possible to achieve a 1.5 degree goal, but only if unsurpassed measures are taken now “, she adds.

She explains that the action plans submitted by countries in 2015 were not ambitious enough to limit global warming. The signatories to the Paris Agreement are expected to make new promises in Glasgow. One of the most important “benchmarks for success” in Glasgow is that as many governments as possible present new plans and “when compiled, these are ambitious enough to put the world on the right track for” well below “2 degrees, preferably 1.5. “

Eighty-six countries, together with the EU’s 27 member states, have submitted new action plans.

“A successful outcome in Glasgow also requires developing countries to keep their promise in 2009 to mobilize $ 100 billion a year by 2020 to support climate action in developing countries. The official figures for 2020 will not be available until 2022, but it is clear that the goal was not reached last year, she says. A video on climate change will be played during the opening session of the COP26 UN Climate Summit, 1 November 2021, in Glasgow, Scotland.

At this point – like other key issues – the G-20 summit of leaders held in Rome on Saturday and Sunday did not raise optimism. Leaders of poorer and smaller nations had hoped to see many more emerge from the Rome Summit.

Progress was made in the form of a significant promise to reach net zero emissions by the middle of the century, but Gaston Browne, Prime Minister of Antigua and Barbuda and President of the Alliance of Small Island States, remained disappointed. “From what I have seen, it seems that we will exceed 1.5 C. We are very worried about that,” he told reporters.

Sonam Wangdi, chairman of the group of least developed countries, said: “Progress is definitely not enough so far. We are far from a 1.5C path. We need them to increase our ambitions.”

Climate activists and researchers say the Glasgow Conference must see a commitment to large and rapid reductions in methane emissions as well, and much more detailed planning for adaptation and resilience so that countries, developed and developing, can better withstand climate shocks and extreme weather events. The Swedish climate activist Greta Thunberg, in the center, speaks together with other climate activists during a demonstration at Festival Park, in Glasgow, Scotland, on the first day of the COP26 summit, 1 November 2021.

COP26 will set the climate agenda for decades to come and much will depend on the developing countries increasing and increasing their efforts. But in the meantime, the leaders of the richer nations are also facing a cash crisis and an energy crisis, both thanks in part to the coronavirus pandemic, and some economists have warned that Western political leaders are creating a climate of promising urgency. promises they are unlikely to be able to keep without major financial damage and election consequences.

The enormous transformation that will be needed, and the huge costs, most of which are likely to be borne by Western taxpayers and households, are a challenge for even the richest countries to cope with. The British economist Liam Halligan, among others, questions whether it is possible to achieve ambitious climate goals without derailing economies that are already struggling to get back on track in a pandemic that has disrupted supply chains, collapsed energy markets and increased inflation.

Politicians are facing a trade-off between the high initial cost of moving quickly towards net zero carbon targets and the long-term damage to economic growth caused by climate change, if they delay action, analysts say. Glasgow is likely to highlight that dilemma.