There are less than a week left until the regional elections on 16 November. The criteria for eligibility are identical to the municipal election, so the majority of foreigners can vote.

These elections, which are held every four years, are an opportunity for Danish citizens and international citizens to shape their regions for the better.

The composition of a regional council, which always consists of 41 members, will have a significant impact on how much money is spent on health – the main priority, which makes up 90 percent of the budget – environmental planning, soil pollution management, etc. questions concerning education.

205 members nationwide
Denmark has three political and administrative levels: national, regional and municipal. Before 2007, Denmark had 13 counties and 270 municipalities, but that changed with the Local Government Reform, which introduced five regions and 98 municipalities.

Voters elect 41 councilors for each region, giving a total of 205 councilors. The elected members of the Regional Council represent their regions for a four-year term. Citizens can only vote for regional councils in the region in which they reside.

The regional houses are located in Hillerød, Viborg, Vejle, Sorø and Aalborg, respectively.

Things to consider when voting
The candidate list is available six weeks before the election in the Citizens’ Service Center (for advance voting purposes) and at the polling stations on election day.

Polling stations are available near the voter’s home address, which can be found via this link: kbhkort.kk.dk/spatialmap.

Any voter can vote in advance at Citizen Service Centers (until Friday, November 12). Advance voting is also possible in any Danish diplomatic mission abroad (embassies and consulates).

In addition, it is also possible to vote in advance in hospitals for inpatient voters, in nursing homes and sheltered housing, and in prisons for detainees. For voters who, due to illness or disability, are unable to attend the polling station on election day, voting by application can also take place at home.

If you have voted in advance, you can not vote on election day.

After the election
Once the names of the 41 members of each regional council have been confirmed, the parties can begin negotiating who will hold the key posts for the coming election period. The four-year period begins on January 1st.

The top position is the chairman of the regional council, but in addition, various committee points are also negotiated.

Once the negotiations are completed, the appointments are formally constituted at a constituent regional council meeting.

Also at the constituent meeting, the Regional Council decides on the composition of the political committees. 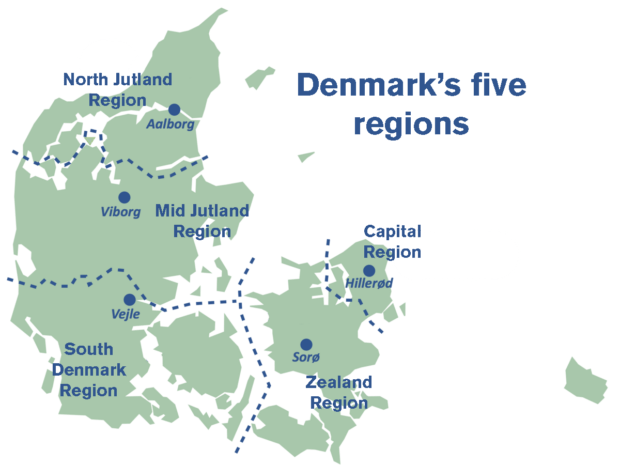 Capital Region
The Capital Region of Denmark has 29 municipalities in its jurisdiction, including Copenhagen, Frederiksberg and perhaps surprisingly Bornholm. It has more than 1.8 million inhabitants and accounts for 40 percent of the Danish gross domestic product. Its largest city is Copenhagen.

The region’s area of ​​responsibility includes the capital’s health system, growth and employment in innovative companies as well as quality of life in the form of a green environment.

The region’s area of ​​responsibility is health, psychiatry and social and regional development.

South Denmark Region
The Region of Southern Denmark covers 22 municipalities with a population of 1.2 million people. The annual budget is approximately DKK 25.6 billion. The largest local municipality is Odense, which has almost 200,000 inhabitants.

The region’s tasks are in health, social and special education, psychiatry and regional development.

Region Zealand
Region Zealand comprises 17 municipalities, of which 22 are cities, with a total population of 821,000 inhabitants. The approximate budget is NOK 18.7 billion. The largest city in the region is Roskilde.

The region handles two main tasks: regional development and an operational company in the health and social area.

the region of northern Jutland
The North Jutland region is the smallest with just 600,000 citizens. Its largest city is Aalborg.

It is responsible for health care, regional development, social services and special education.