The most beautiful island monasteries in Russia

During the tsarist period, they were major religious centers and pilgrimages. During the Soviet era, they were converted into prisons, military schools and homes for people with disabilities. 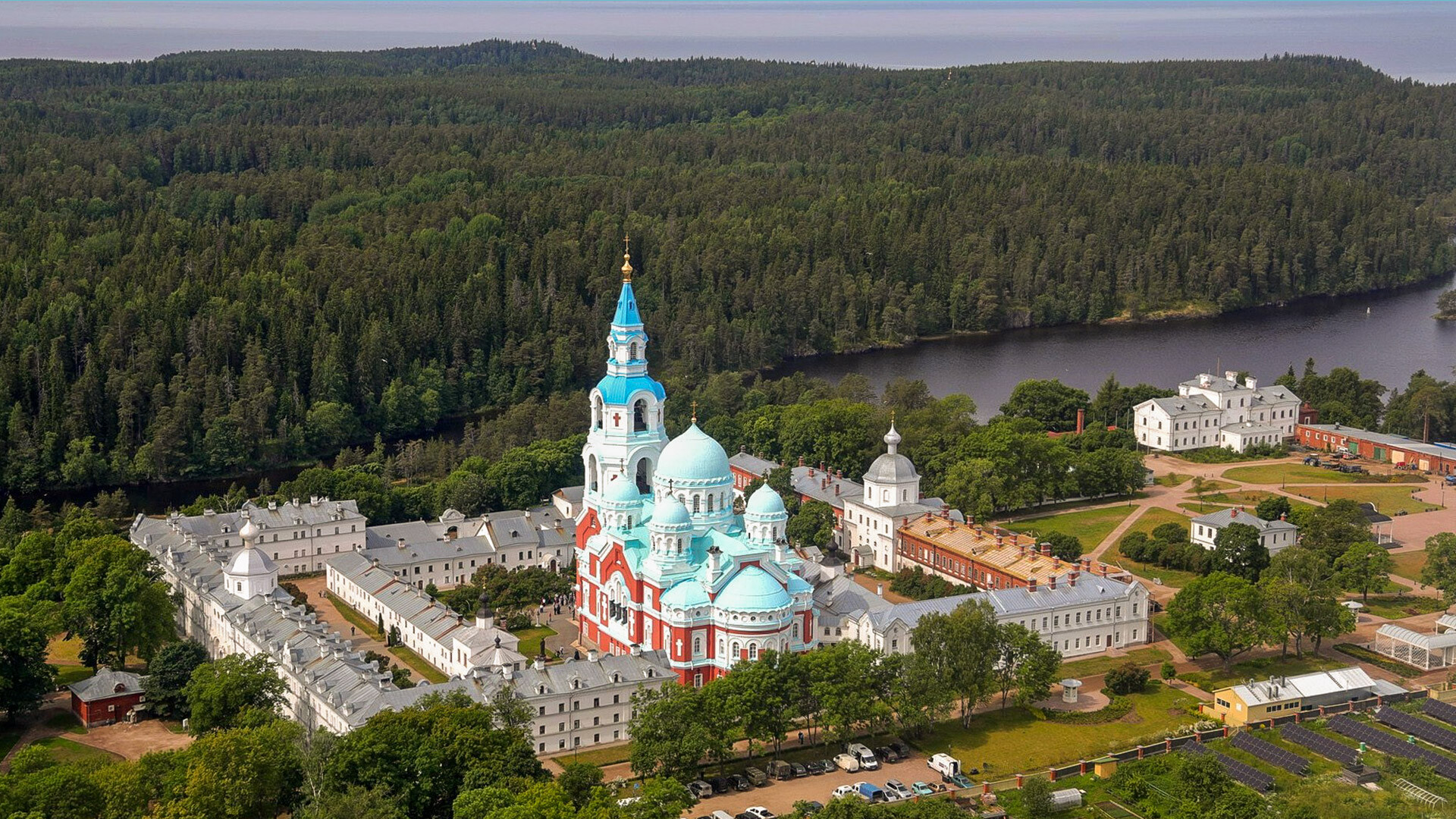 One of Russia’s most famous monasteries is located on the islands in the Valaam archipelago in the northern part of Lake Ladoga. According to legend, this place was once visited by the apostle Andrew, who erected a stone cross and ruthlessly destroyed the temples of the pagan gods Veles and Perun.

The authentic history of the Stauropegic (directly subordinate to the patriarch of the Russian Orthodox Church, as opposed to local diocesan authorities) Valaam Monastery of the Transfiguration of the Savior dates back to the 14th century. Despite many Swedish raids, the monastery grew and flourished.

At the dawn of the Russian Empire, the monastery was one of the largest in the country, consisting of 21 churches, 22 chapels, 600 monks and even several own factories and workshops for the manufacture of candles, bricks and leather. After the revolution in 1917, the archipelago together with the monastery became part of Finland. 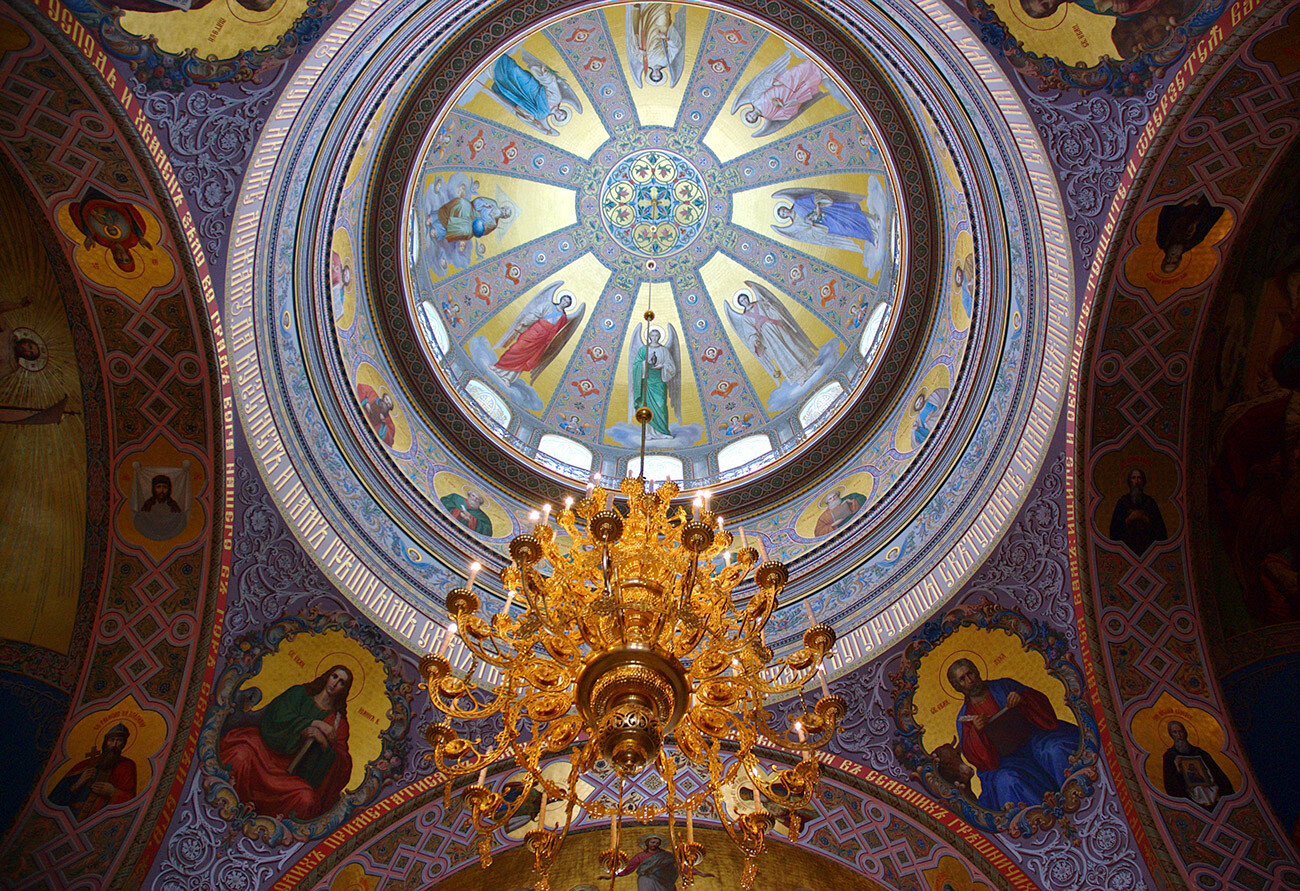 After the Soviet-Finnish war in 1940, the Valaam monastery was again under Moscow control. A long period of destruction began: valuables and rare books were carried out, the buildings were used to house a school for bosuns and juniors, a state farm and, after World War II, a shelter for disabled veterans.

The rebirth of the monastery began on the eve of the collapse of the Soviet Union in 1989. Today, Valaam, which has regained its former glory, is one of the most important pilgrimage and tourism centers in Russia. 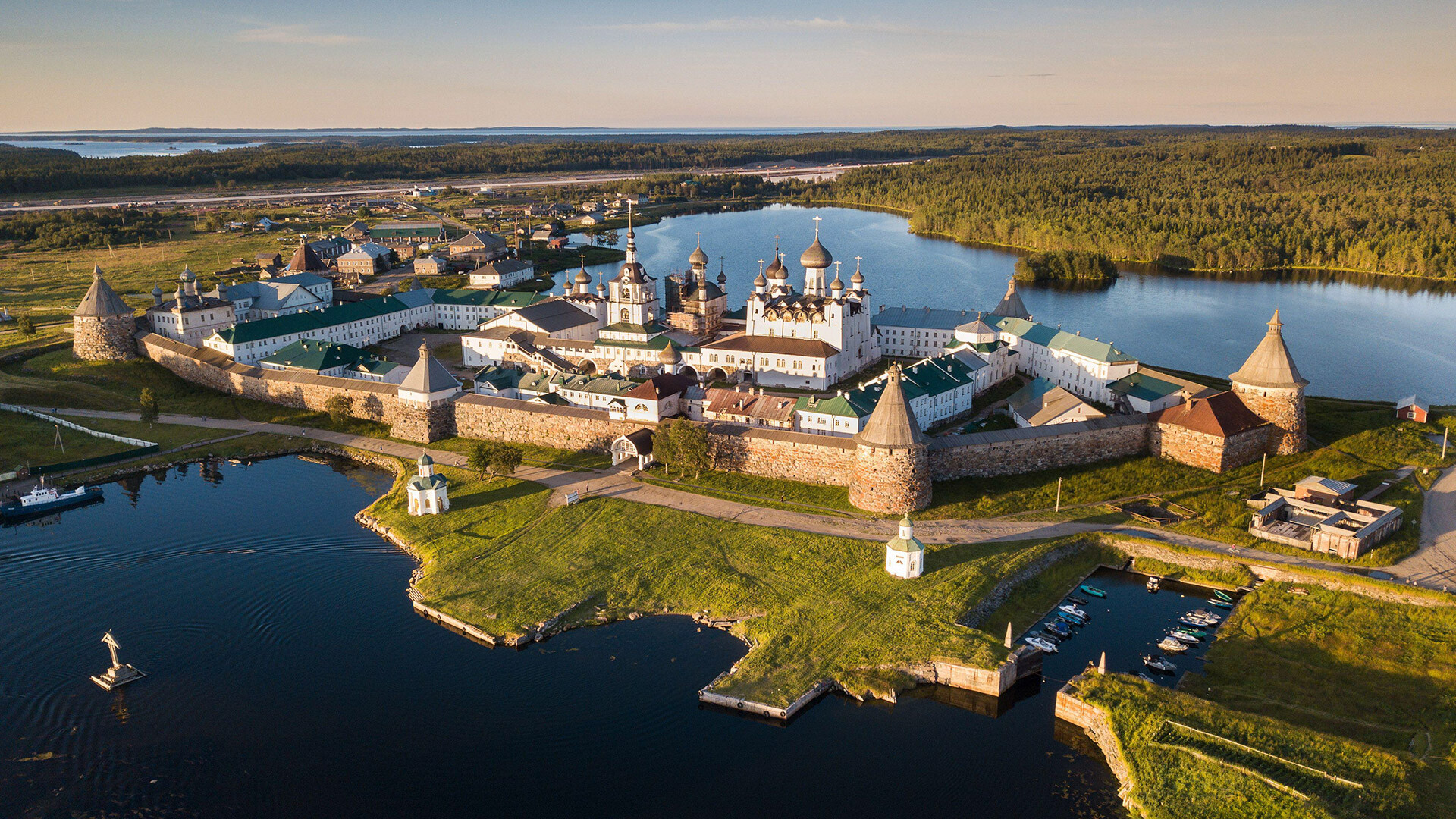 In 1429, the monks Savvatiy and Hermann came to Big Solovetsky Island, located in the White Sea, and “planted a cross and a cell” there. Seven years later, Zosima appeared on the island. The Russian Orthodox Church associates the beginning of the history of the Stauropegiska Solovetsky Monastery with the transformation of the Savior with these three saints.

The monastery not only became a major religious and cultural center, but also one of the most important Russian outposts in the exploration of the Nordic countries. As it was well fortified, it repeatedly repulsed attacks from the Swedish army. 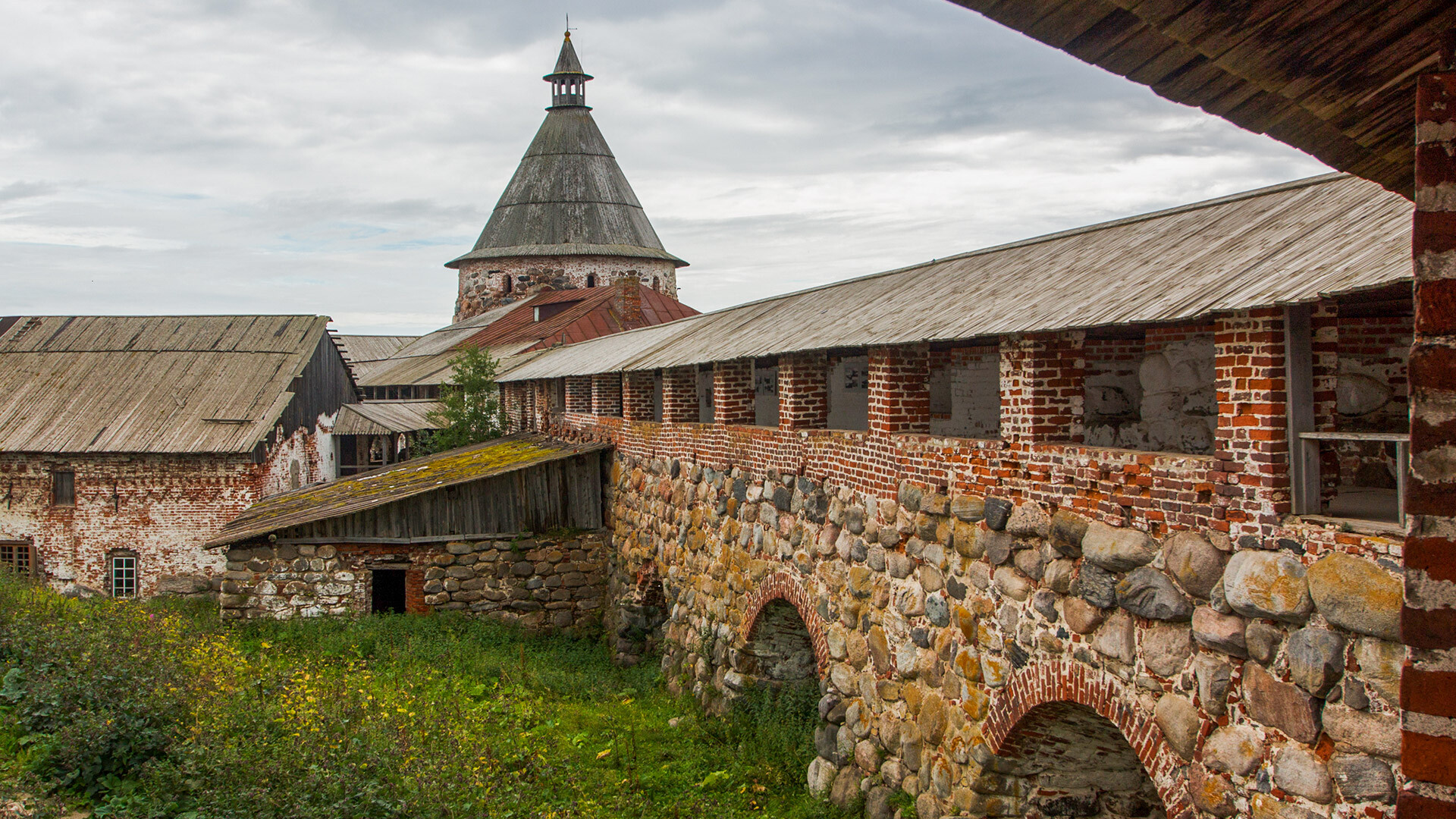 In 1668, the Solovetsky monks came into conflict with the central authorities and refused to acknowledge the changes initiated by Patriarch Nikon in liturgical books and ecclesiastical ceremonies. Things even led to an armed confrontation. For several years the tsarist army besieged the monastery, which finally fell in 1676. Immediately afterwards, twenty-six active rebels were executed by the monks.

In 1920, the Bolsheviks closed the monastery and requisitioned its cultural treasures. Later, the Solovetsky Special Purpose Camp (and from 1937 – the Solovetsky Prison), the Young Guard School and the Museum Reserve were installed in its area. The gradual revival of the monastery did not begin until 1988. 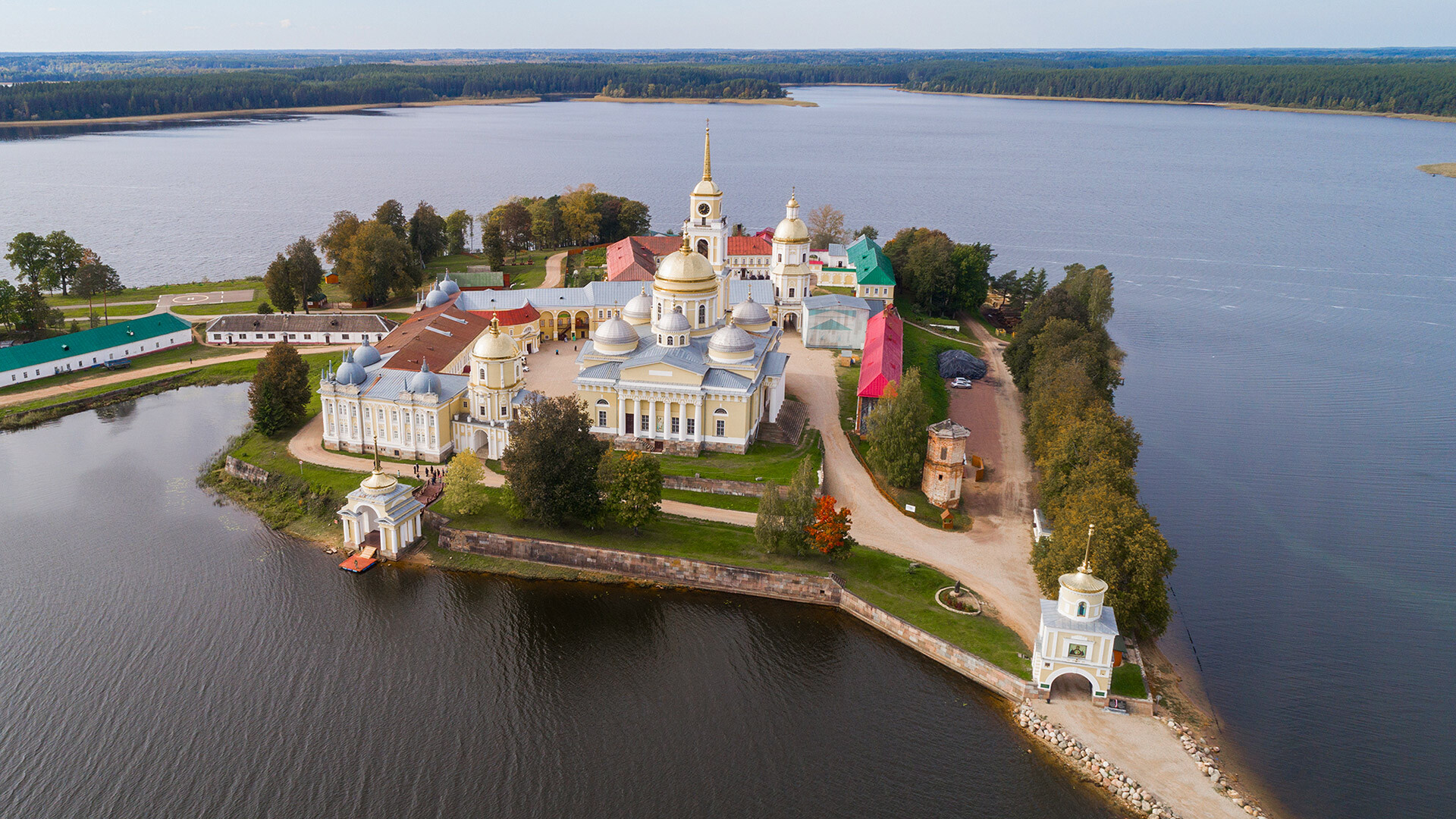 A monk named Nilos spent 27 years in total seclusion on the island of Stolobny on Lake Seligersjön in the province of Tver. His life was full of hard agricultural work and prayers. After making a promise never to lie down, he slept and rested standing, leaning on wooden hooks in his cell.

He died in 1555 and was buried on the island, where monks, who had been inspired by him, soon began to settle. Almost forty years later, a monastery was founded on the island of Stolobny.

Tens of thousands of pilgrims from all over the Russian Empire visited the Nilo-Stolobensky Hermitage every year, and wanted to touch the reliquary (with the relics inside) of Pastor Nil. The monastery enjoyed the special protection of the royal family, who did not forget to take care of its improvement. 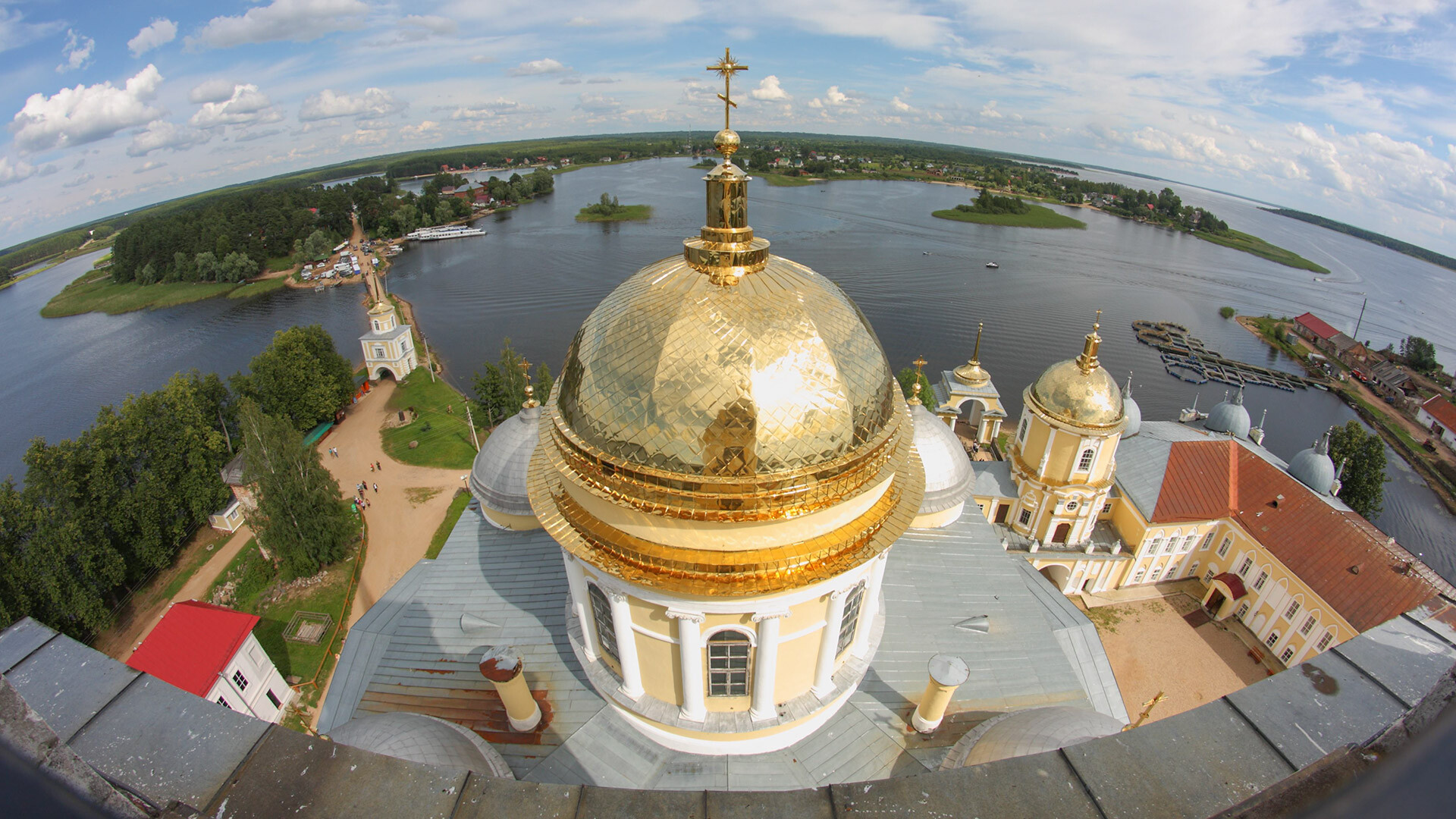 As with other Orthodox monasteries, the Soviet era was a time of hardship for the hermitage. On various occasions it was used as a prison for young offenders, a camp for Polish prisoners of war, a nursing home and a tourist base.

In 1990, the Nilo-Stolobensky Hermitage was returned to the Russian Orthodox Church. Five years later, the relics from St. Nile to the hermitage of the local museum in the neighboring town of Ostashkov, where they had been kept after the revolution. 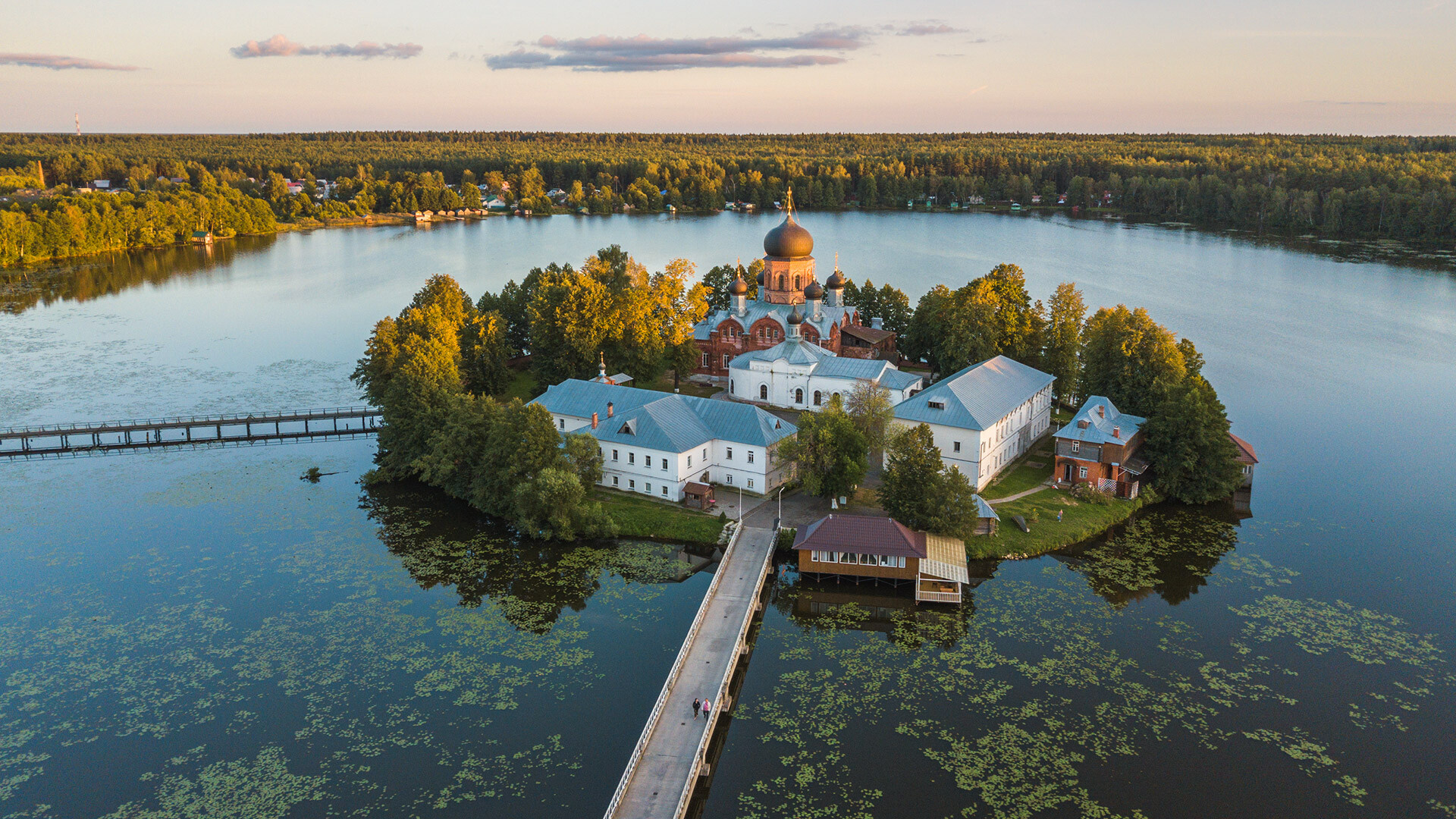 A small deserted island in the middle of Lake Vyatka (now Lake Vvedenskoe located in the Vladimir region) began to be inhabited in the late 17th century by monks seeking a secluded and righteous life. The Svyato-Vvedensky Island Hermitage was founded shortly after.

Near the end of the Soviet era, during which it served as a juvenile detention center, a gym, a cinema, and a furniture store, it was returned to the jurisdiction of the Russian Orthodox Church. Today, this once men’s monastery is now a women’s monastery. 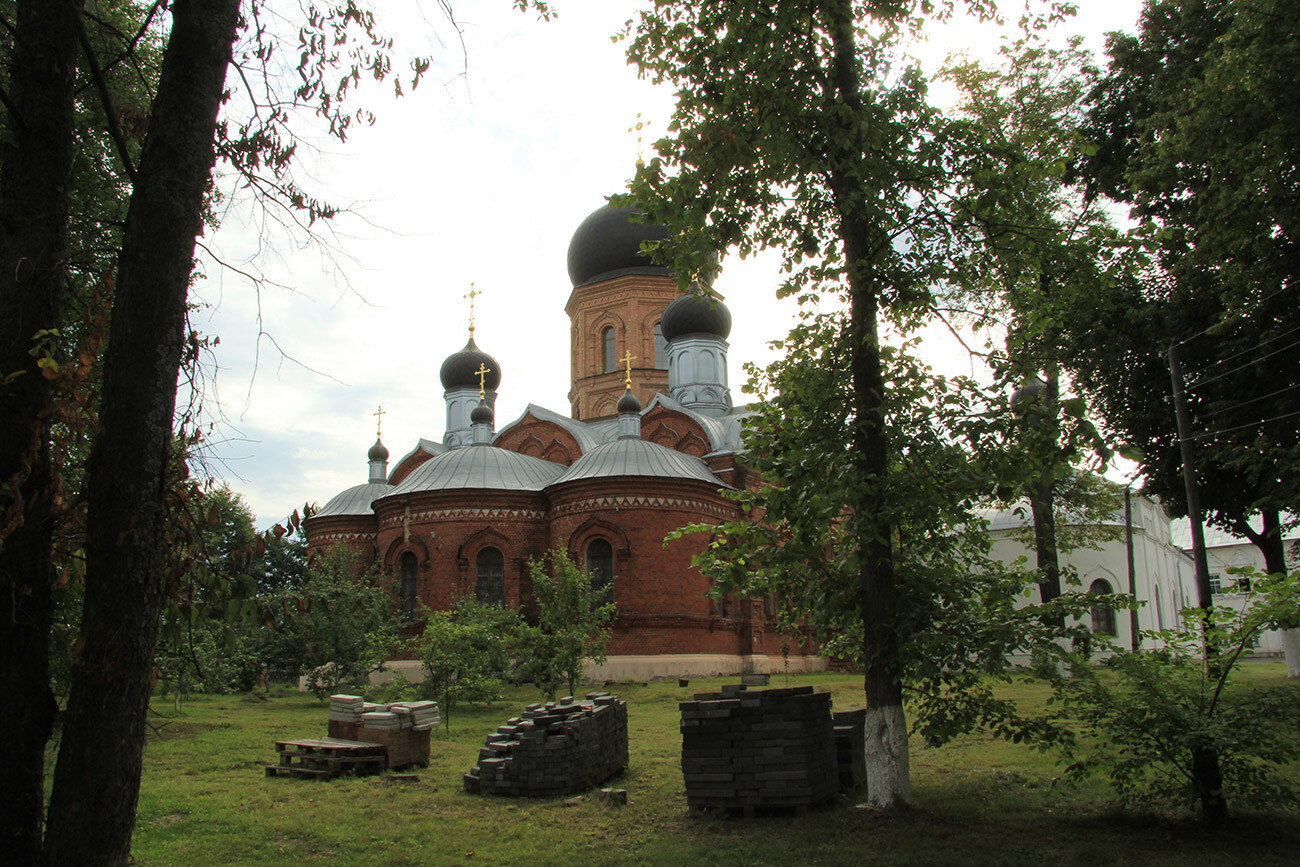 In 2007, with the blessing of the abbess Fevroniya, an orphanage and boarding house “Kovcheg” (“The Ark”) were opened for girls near the entrance to the monastery. Orphaned children help the nuns in their daily work and they in turn give them spiritual support to find a lifeline. 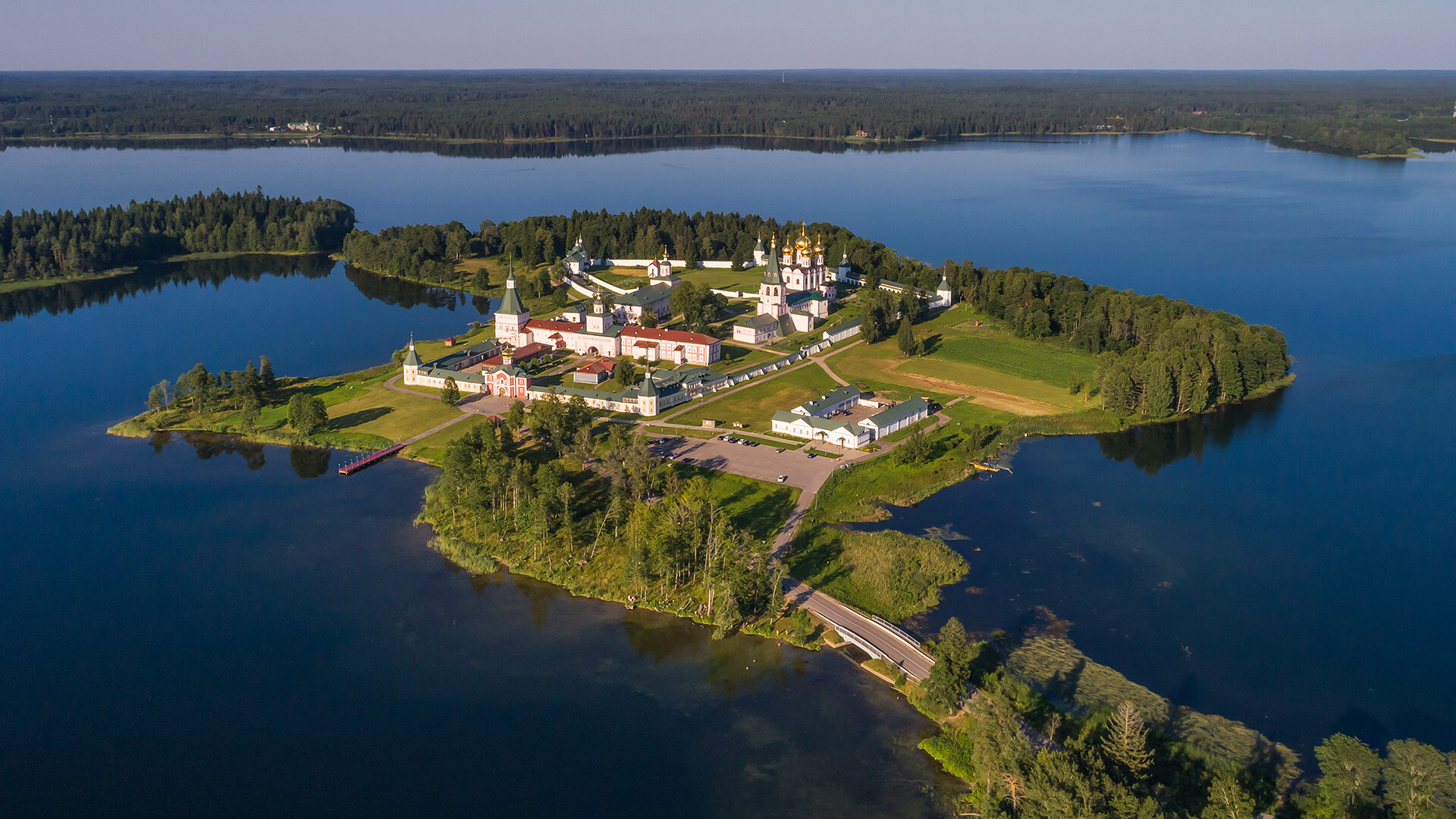 Patriarch Nikon was the initiator of the Iversky Monastery. He dreamed of creating a monastery in Russia in the image and resemblance of the Iversky monastery on Mount Athos in Greece. His wish came true in 1653 on the island of Selvetsky in Lake Valdai, not far from Veliky Novgorod.

At Nikon’s request, the monks in the same Athos monastery produced a copy of the miraculous Iveron icon of the Mother of God. By sending the icon to the Russian state, the Greeks claimed in a cover mail that the iconographer “only ate on Saturday and Sunday and the brothers ate Full Night and Liturgy twice a week. And this newly painted icon does not differ from the first icon in length, width or image, but it is as old as the first.” 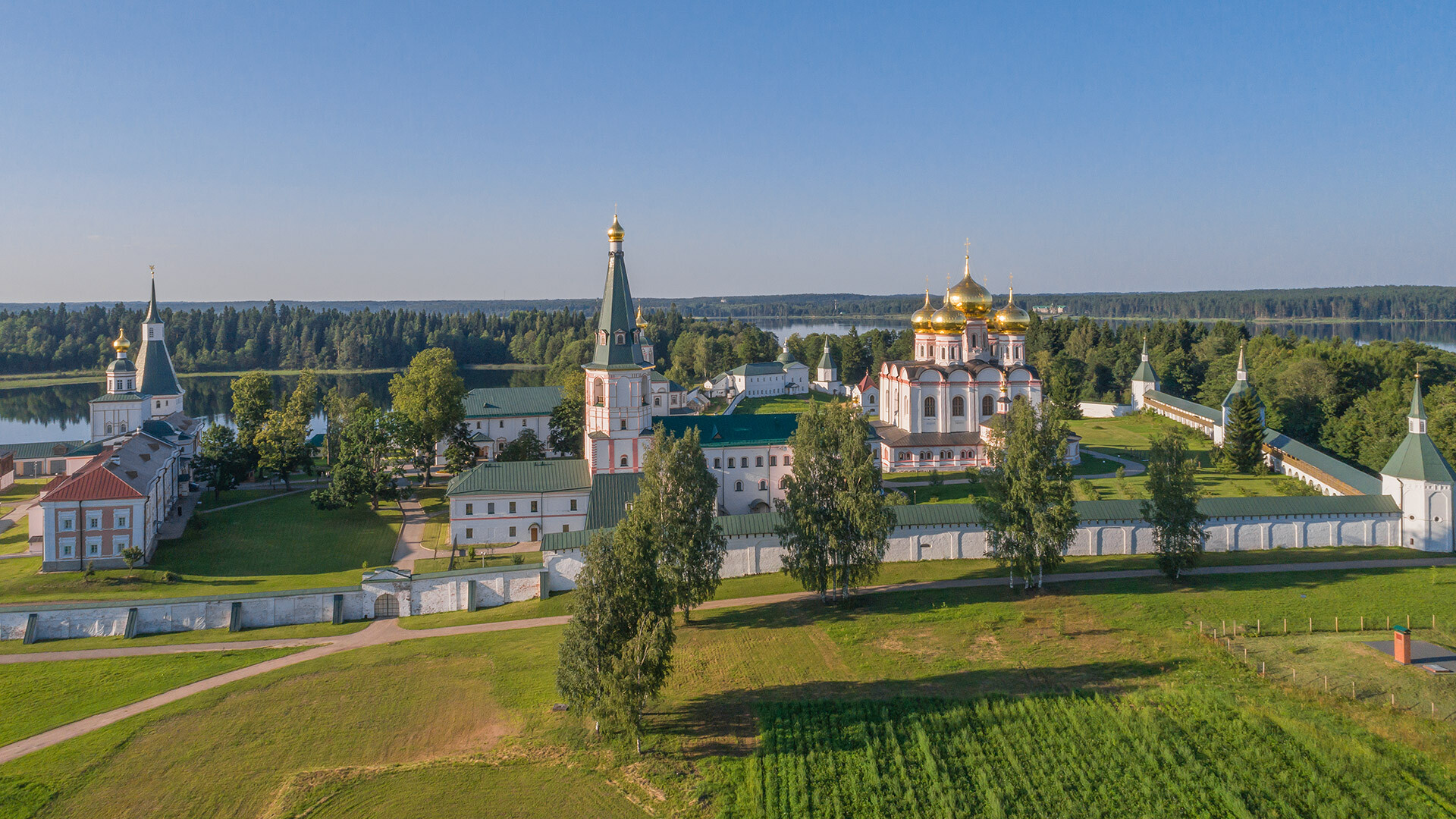 The Iveron icon became the main relic of the Valdai Monastery and was used to dedicate the monastery’s heavenly cathedral, one of the largest in Russia at the time: 42.8 meters wide, 44.9 meters long and almost 43 meters high.

After the closure of the monastery in 1927, the authorities used it at various times as a house for disabled war veterans and a school for children with tuberculosis. In 1991, the abandoned monastery was transferred to the diocese of Novgorod, which immediately began work on restoring it.