10 most luxurious snuff boxes used by the Russian tsars

The best jewelers made boxes to store snuff for true works of art. When you take a closer look at them, you can learn a lot about their original owners, important historical events and even steamy love affairs. 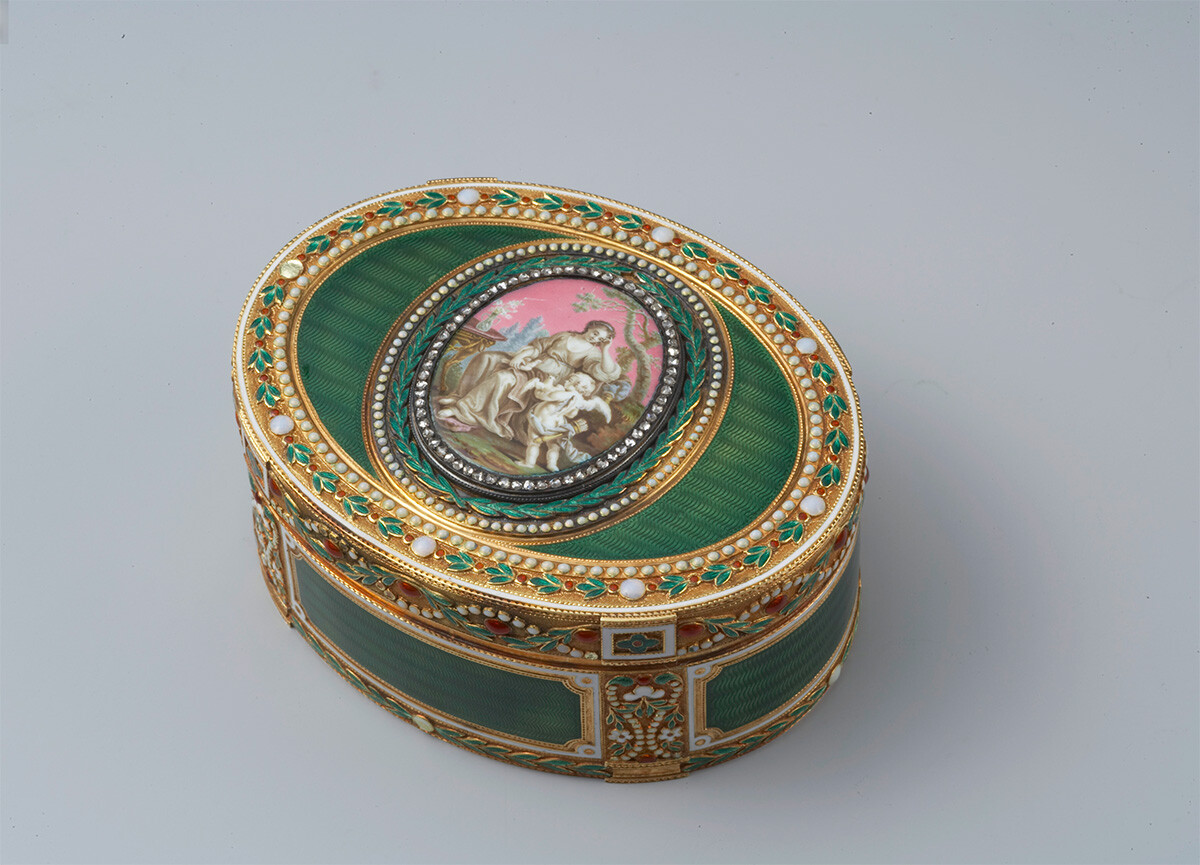 This exquisite masterpiece by Mikhail Perkhin, who worked for the company Faberge, was an “answer” to Alexander III’s question as to whether Russian jewelers can create luxury objects as stunning as their French counterparts. Inspired by Joseph Etienne Blairzy’s snuff box from Catherine the Great’s collection, Perkhin created his own variant. He adorned the gold box with green enamel and placed a picture depicting Venus and Cupid on the lid, which was surrounded by a scattering of diamonds. The work of the Russian master was so spectacular that the emperor sent the snuff box to the Hermitage Museum together with the French original. 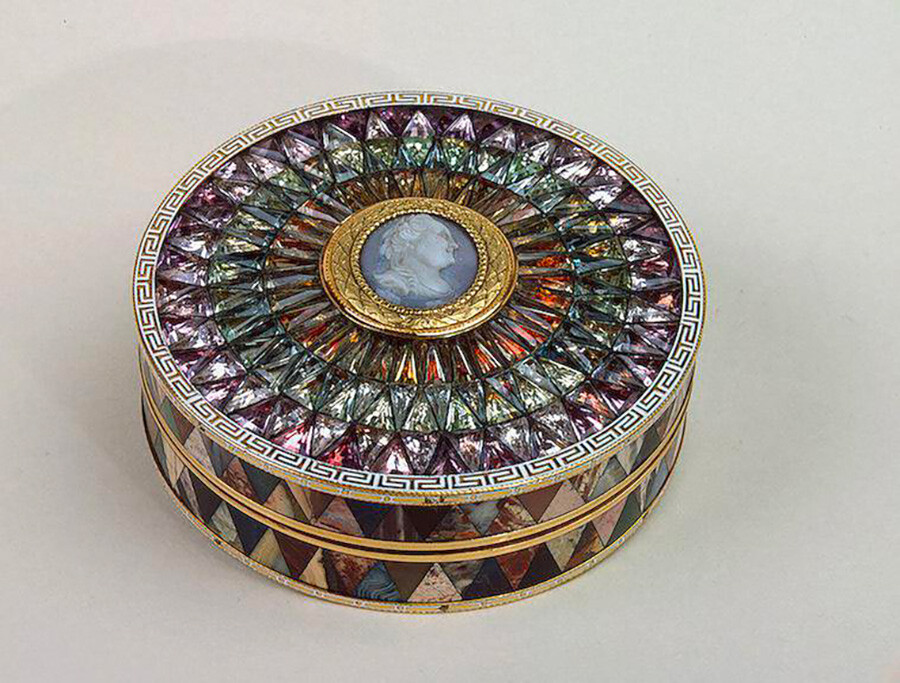 Catherine the Great really loved tobacco. She had snuff boxes literally everywhere. During her reign, the elegantly decorated boxes became not only fashion items but also magnificent works of art. Her collection contained snuff boxes for any theme or occasion. For example, the “Cabinets of Stones” series consisted of snuff boxes sprinkled with precious stones. One of them, made by David Rudolph in the 1780s, was dedicated to the wealth of Russia’s natural resources. The craftsman from St. Petersburg covered the sides of the snuff box with agates and multicolored jasper and placed the Siberian weapon on the inside. In the middle of the lid, surrounded by topaz and amethysts, he placed an onyx cameo with a portrait of Catherine the Great. 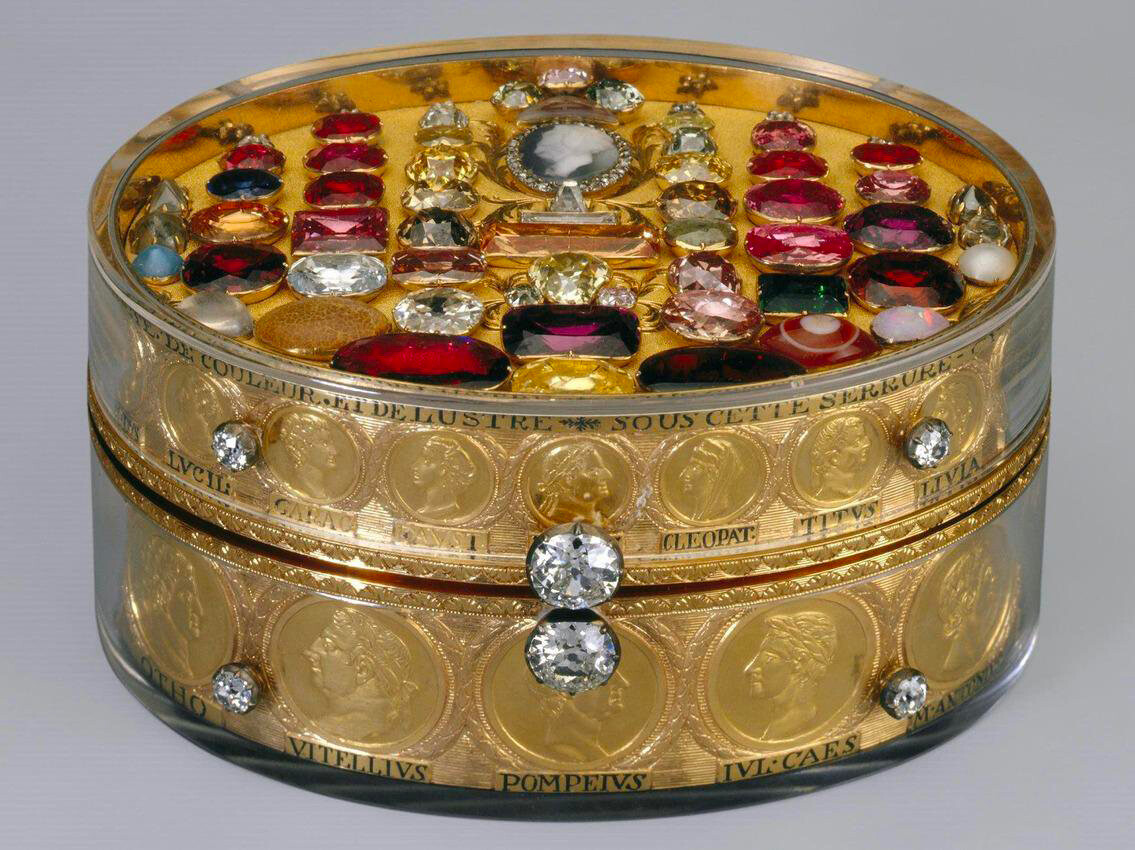 When looking at this item, it is hard to imagine that it was only intended for tobacco storage. In fact, it looks like a puzzle ready to be solved. The golden oval box made by a Viennese craftsman is decorated with 54 stones. In the middle is an agate reminiscent of Catherine the Great’s face profile. It is surrounded by “oriental gemstones”: diamonds, turquoise, tourmalines, aquamarines, garnets, emeralds, topaz and moonstones. Together they form the eight spheres of the universe, as Plato imagined it. The snuff box is “remade” with medallions depicting Roman emperors. But the surprises do not end there. The bottom of the box also has precious stones, which form an eternal calendar. The blue enamel back has minerals that symbolize the moon, the sun and the months of the year.

4. A snuff box with the portrait of Sultan Abdul Hamid 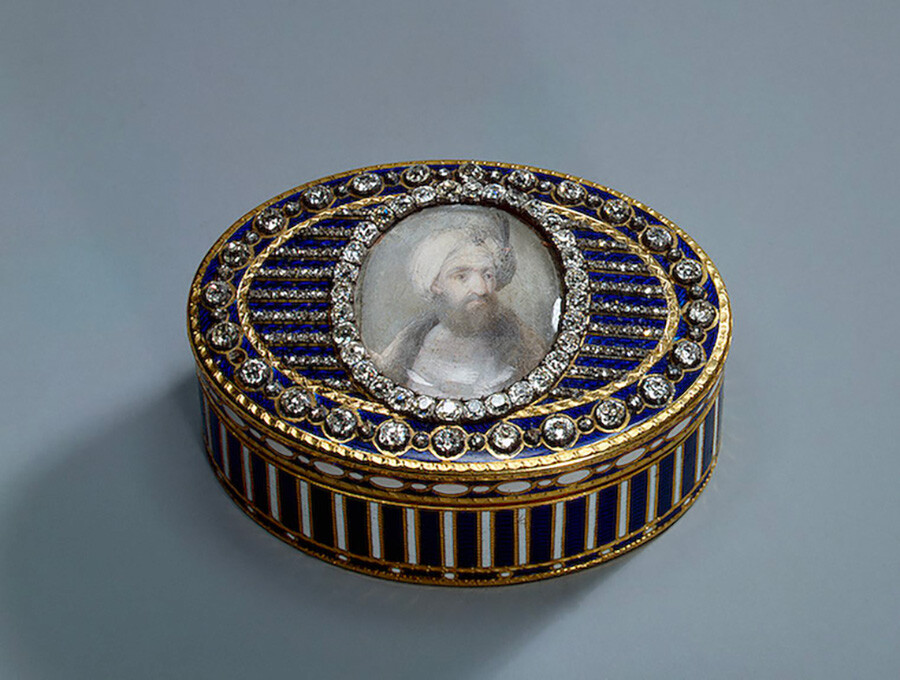 Snus cans were also used to chronicle important events. Conquests and discoveries of new lands, victories in war – all this was reflected on these small objects. For example, on the occasion of the Treaty of Kücük Kaynarca between Russia and Turkey, the Empress ordered a special snuff box from Johann Gottlieb Scharf. The blue enamel is dotted with diamonds and in the middle is a watercolor portrait of the Turkish sultan Abdul Hamid in a fur coat and turban. 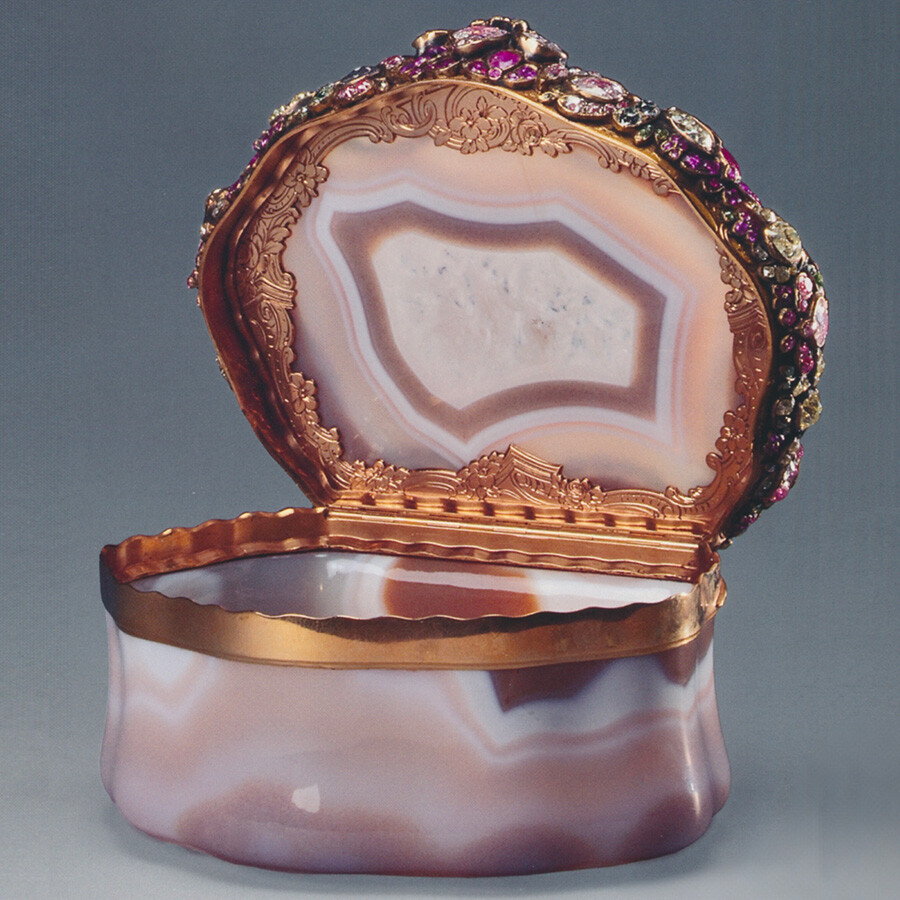 Many monarchs collected snuff boxes. Frederick the Great, king of Prussia, was a passionate collector. The monarch’s collection numbered more than 1,500. Undoubtedly, these miniature works of art were the subject of Fredrik’s pride. That is why he often gave them away as gifts. For example, he once gave a snuff box to Friedrich Wilhelm III, uncle of Alexander II and the father of the Empress Alexandra. It was made of light gray agate and decorated with diamonds, nephrites and rubies on a background of multicolored foil. In turn, Friedrich Wilhelm III presented it to Nicholas I. 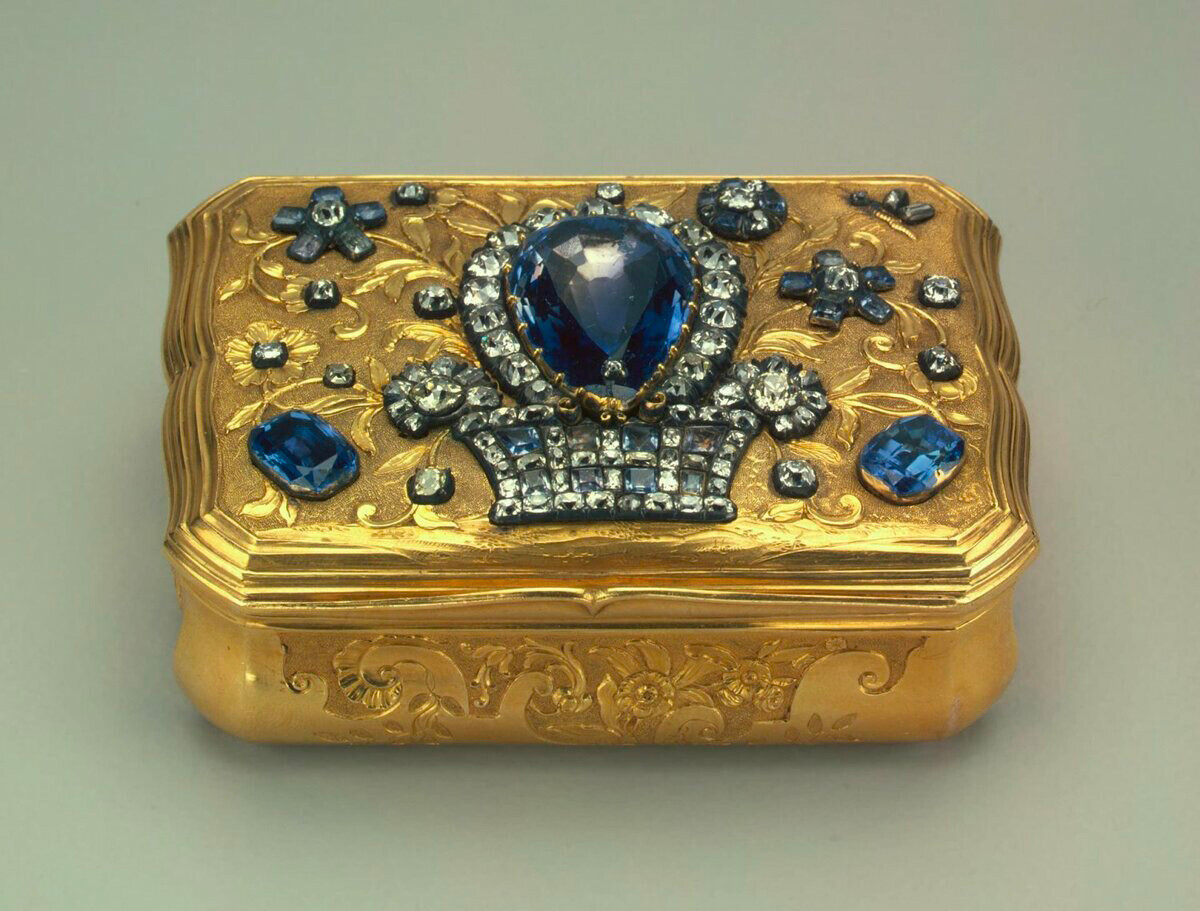 One of the craftsmen who created jewelry for the Russian monarchs was the Swiss Jeremiah Pozier. He became a court jeweler under the Empress Anna, made earrings, brooches and precious “bouquets” for Elizabeth, and created the famous great imperial crown for Catherine the Great. His orders also included snuff boxes. He made one for Catherine in gold with a lush floral decoration. The lid and walls are decorated with ornaments, and a diamond spread forms a basket in the middle of which a large “flower” – a sapphire.

7. A snuff box with a portrait of the Italian greyhound “Lisette” 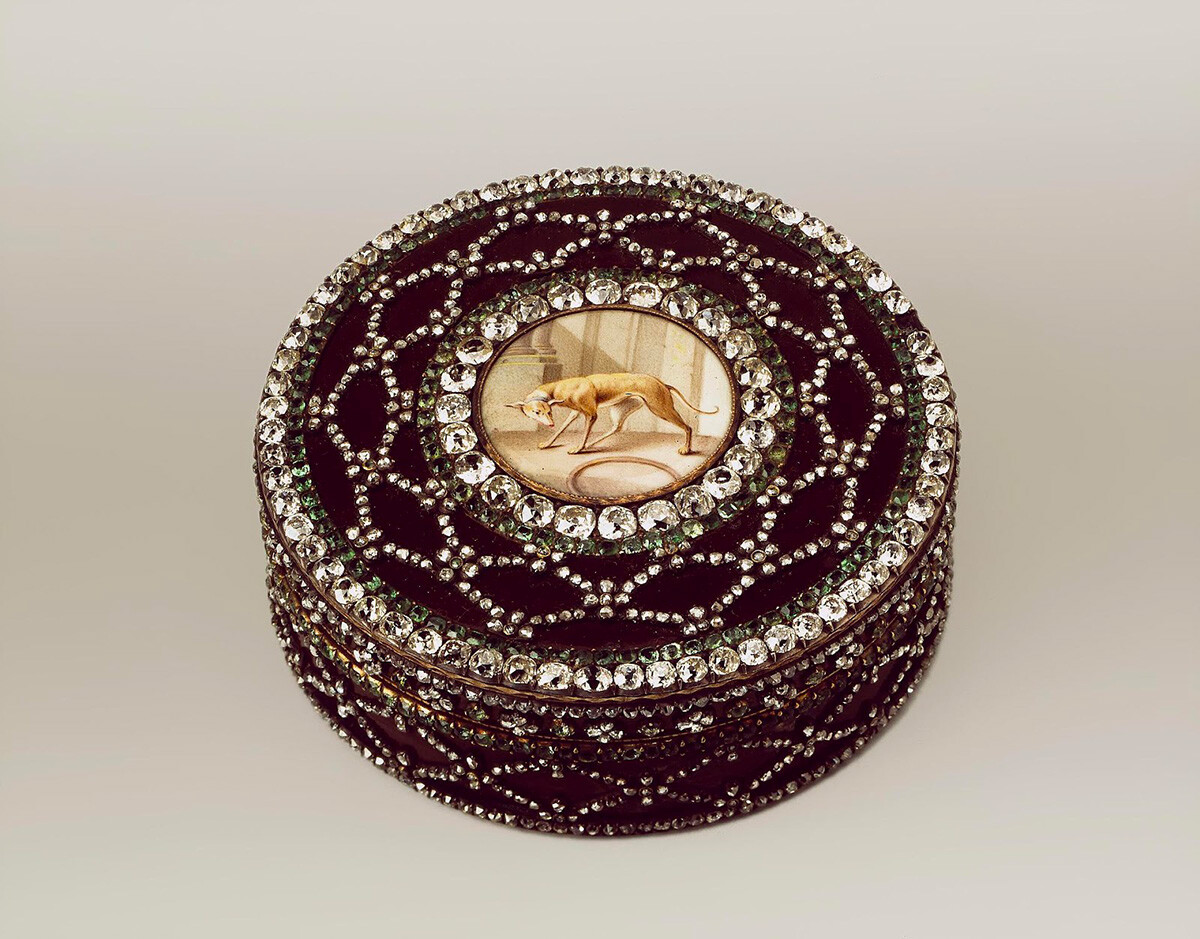 The medallion depicting the Italian greyhound “Lisette” was placed on a snuff box by the German jeweler Johann Gottlieb Scharf. The portrait is laced with diamonds and emeralds. Dogs of this breed were Catherine’s passion. From 1770, elegant Italian greyhounds lived in the empress’s apartments. In her letters, she talked about the dogs with great pleasure, but she sometimes complained that her handwriting was stained because of them. At the same time, she was disappointed that her pet could not talk. 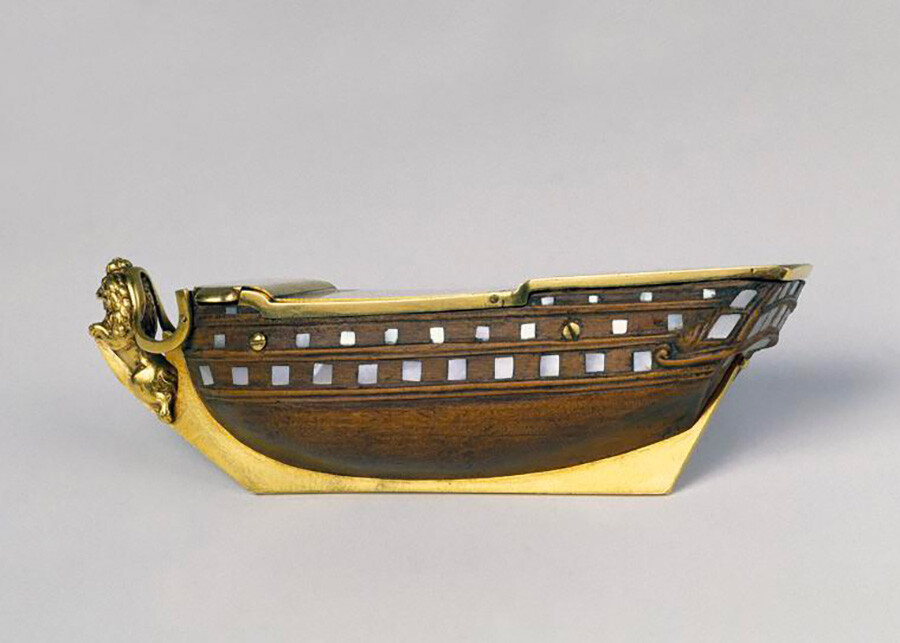 This ship-shaped snuff box accompanied Peter the Great on his voyage to Flanders and Great Britain. The galley hull is made of wood and gold, decorated with silver and a figure of a roaring lion, while the cannon gates are covered with mother of pearl. The idea of ​​JPM’s jewelers was to remind Peter of the birth of the Russian navy and his victory in the Azov campaigns.

9. A snuff box with the portrait of Countess Kozel 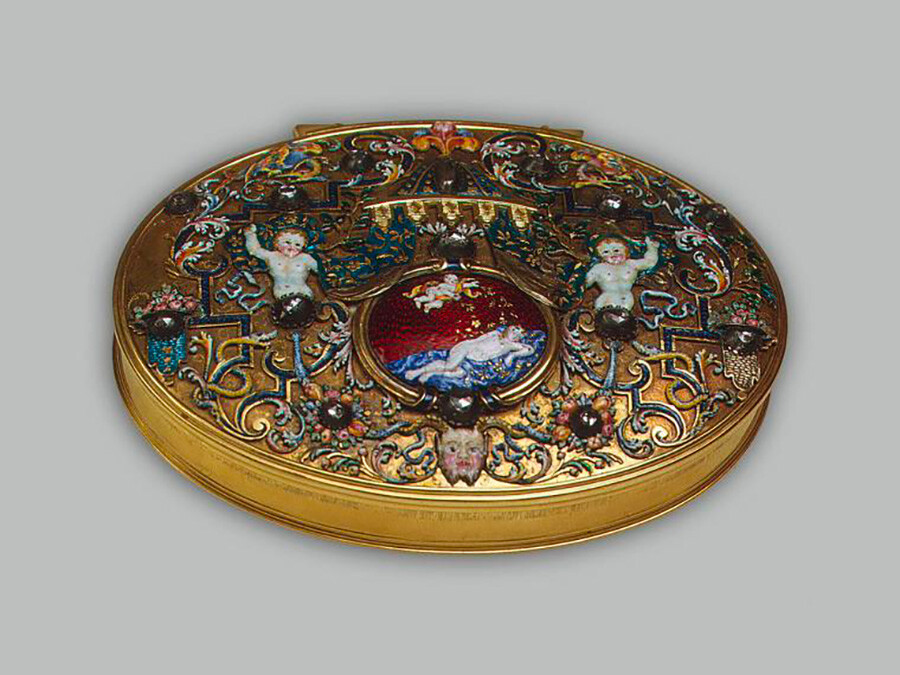 Craftsmen not only decorated snuff boxes, but also gave special meanings to patterns and images. A snuff box can serve as a valuable gift, a reminder of an unforgivable deed or even a romantic relationship. The King of Poland, Augustus the Strong, gave Peter the Great a precious box depicting the story of “Leda and the Swan”. This golden snuff box was made by the famous Swedish craftsman Carl Gustav Klingstedt, who richly decorated it with ornaments, diamonds and rock crystals. The fact that Countess Kozel, a mistress of Augustus, was portrayed as Leda added a certain peculiarity to the plot.

10. A snuff box with double lids 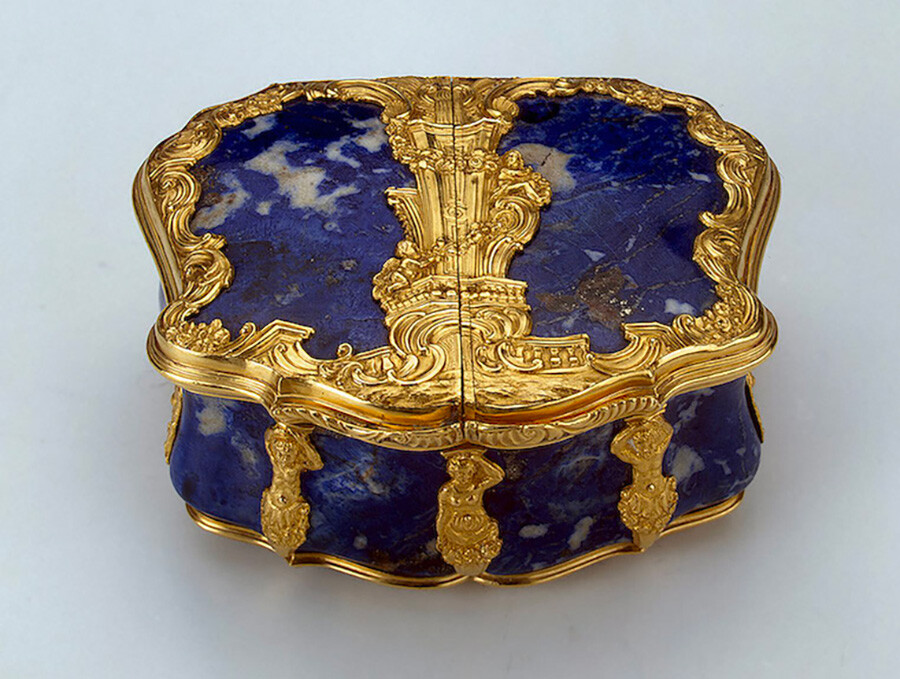 During the reign of Empress Elizabeth, tobacco became so popular that she had to issue a decree banning it in churches. Her own collection of snuff boxes was impressive – porcelain and gold, studded with stones and decorated with monograms and portraits of the Empress. Among them, however, there were also practical ones: for example, a snuff box made of lapis lazuli that was intended for two types of tobacco. A golden frame separates the two sections in the middle, which makes the snuff box look elegant and solemn at the same time.