NATO leaders are holding the last day of the summit

MADRID – NATO leaders meet on Thursday in Madrid, Spain, for the last day of a summit that has included approval a new strategic concept for the alliancementions “Russia’s aggression”, “systemic challenges from the People’s Republic of China” and the “deepened strategic partnership” between the two countries as its main priorities.

In this document, the Western military alliance formed after World War II defined Russia as the “most significant and direct threat” and addressed for the first time China’s challenges to NATO’s security, interests and values.

The Alliance agreed to increase support for Ukraine as it defends itself from the Russian invasion, now in its fifth month. Secretary-General Jens Stoltenberg told reporters earlier this week that NATO will increase the number of troops on high alert by more than seven times to more than 300,000 – amid what he described as “the most serious security crisis” since World War II.

Embed Share The United States Increases Expansion in Europe When NATO Summit Warns of Russian Threat Embed Share The code has been copied to your clipboard. width px height px

The URL has been copied to your clipboard

No media source available at this time

On Wednesday, President Joe Biden announced that the United States is strengthening its military presence in Europe, including deploying additional naval fighters in Spain and positioning more troops elsewhere, in response to a “changed security environment” and to strengthen “collective security.”

Biden said the United States would establish a permanent headquarters for the U.S. 5th Army Corps in Poland, add a rotating brigade of 3,000 soldiers and 2,000 other personnel to be headquartered in Romania, and send two more F-35 squadrons fighter aircraft to the United Kingdom.

“Earlier this year, we increased another 20,000 US forces to Europe to strengthen our lines in response to Russia’s aggressive moves, bringing our total strength in Europe to 100,000,” he said, adding that the United States will continue to adjust its defensive position. “based on the threat in close consultation with our allies.”

Also on Wednesday, in a virtual speech to NATO, Ukrainian President Volodymyr Zelenskyy said that his country needs more advanced weapons and about $ 5 billion a month to defend itself.

“This is not a war waged by Russia only against Ukraine. This is a war for the right to dictate the conditions in Europe – for what the future world order will look like,” Zelenskiyy told the summit leaders. 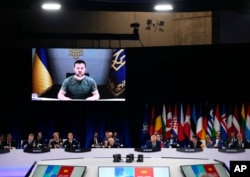 Ukrainian President Volodymyr Zelenskyy speaks to the leaders via a video screen during a round table meeting at a NATO summit in Madrid, Spain, on June 29, 2022.

“What I have heard collectively from everyone is the realization of the importance of Russia not winning, the idea being that if Russia learns the lesson that widespread use of military force yields something, Europe will not be stable or secure in the future. and therefore Russia must not win, Ukraine must win, he tells VOA.

The language of NATO’s strategic concepts suggests a significant change in its unity and sense of urgency when it comes to great power rivalry, said Stacie Goddard, Professor of Political Science at Wellesley College. She emphasized the Alliance’s warning of a deepened partnership between Russia and China as a challenge to the existing order.

“Certainly it’s just words, but both the news and the clarity of the rhetoric are striking,” she told VOA.

Beijing does not support Russia’s war in Ukraine militarily, but Chinese leader Xi Jinping has expressed support for Moscow on “sovereignty and security” issues. The country continues to buy huge amounts of Russian oil, gas and coal.

“This is seen as extremely threatening, not only for the United States, but also for Europe,” Robert Daly, director of the Kissinger Institute on China and the United States at the Woodrow Wilson Center, told VOA.

U.S. National Security Council spokesman John Kirby told reporters on Tuesday that allies had “growing concern about China’s unfair trade practices, the use of forced labor, the theft of intellectual property rights and their bullying and coercive activities, not only in the Indo-Pacific region but around world.”

NATO’s strategic concept is an assessment of security challenges and guides the Alliance’s political and military activities. The last one was adopted at the NATO summit in Lisbon in 2010 and ironically contained the words: “NATO does not pose a threat to Russia. On the contrary: we want to see a true strategic partnership between NATO and Russia.” 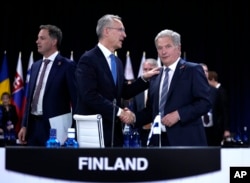 Biden praised Turkish President Recep Tayyip Erdoğan, who on Tuesday dropped his objections to bids from Sweden and Finland’s bid to join the alliance.

“I would especially like to thank you for what you did to put together the situation with regard to Finland and Sweden, and all the incredible work you are doing to try to get the barley out of Ukraine,” Biden told Erdoğan during a one-off conference. -a meeting next to the summit. 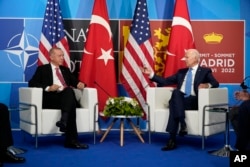 President Joe Biden will meet with Turkish President Recep Tayyip Erdogan during the NATO Summit in Madrid, Spain, on June 29, 2022.

When Ankara lifted its veto on NATO membership for Finland and Sweden, the administration threw its support behind the potential sale of US F-16 fighter jets to Turkey.

As NATO will expand its membership, the summit also focused on strengthening partnerships with non-NATO countries. Leaders from Australia, Japan, South Korea and New Zealand will attend the summit.

“President Putin has failed to close NATO’s door,” Stoltenberg said. “He gets the opposite of what he wants. He wants less NATO. President Putin gets more NATO by joining Sweden and Finland in our alliance.”

NATO’s strategic concept also states that climate change is “a crucial challenge for our time.”

VOA’s Chris Hannas and Henry Ridgwell in Madrid contributed to this story.