Dubai, United Arab Emirates – Iran has arrested an internationally renowned filmmaker, several newspapers reported on Tuesday, the third Iranian director to be locked up in less than a week as the government escalates a crackdown on the country’s famous cinema industry.

The arrest of award-winning director Jafar Panahi and greater pressure on filmmakers follows a wave of recent arrests as tensions escalate between Iran’s tough government and the West. Security forces have imprisoned several foreigners and a prominent reformist politician as talks to revive Tehran’s nuclear deal with world powers have come to a standstill and fears are growing over the country’s economic crisis.

Panahi, one of Iran’s most notorious dissidents, had gone to the Tehran prosecutor’s office on Monday night to investigate the cases of his two colleagues who were arrested last week, when security forces also scooped him up, the reports said.

A Panahi colleague who spoke on condition of anonymity for fear of reprisals told The Associated Press that authorities sent him to Iran’s infamous Evin prison to serve a prison sentence dating back several years.

In 2011, Panahi was sentenced to six years in prison for creating anti-government propaganda and banned from filmmaking for 20 years. He was also banned from leaving the country.

But the verdict was never properly enforced and Panahi continued to make underground films – without government script approval or permission – which were released abroad with great appreciation.

Panahi has won several festival awards, including the 2015 Berlin Golden Bear for “Taxi”, a comprehensive meditation on poverty, sexism and censorship in Iran, and Venice’s Golden Lion 2000 for “The Circle”, a deep dive into women’s lives in Iran’s patriarchal society. 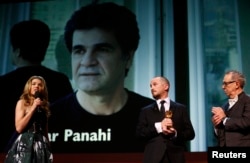 FILE – Jury President Darren Aronofsky, center, holds the Golden Bear for Best Picture for the film “Taxi” by Jafar Panahi at the Berlinale International Film Festival on February 14, 2015. Panahi was not present at the ceremony because he was not allowed to leave Iran.

The Berlin International Film Festival said it was “appalling and upset” to hear of Panahi’s arrest, calling it “another violation of freedom of expression and art.”

His detention came after the arrest of two other Iranian filmmakers, Mohamad Rasoulof and Mostafa al-Ahmad.

Authorities accused Rasoulof and al-Ahmad of undermining the nation’s security by expressing opposition on social media to the government’s violent crackdown on unrest in the country’s southwest.

Following the catastrophic collapse of the Metropol building that killed at least 41 people in May, protests erupted over allegations of government neglect and deep-rooted corruption. The police responded with a hard hand, clubbed protesters and shot tear gas, according to pictures that circulate broadly online.

Rasoulof won the Berlin Film Festival’s highest award in 2020 for his film “There Is No Evil” which explores four stories loosely linked to themes of the death penalty in Iran and personal freedoms during tyranny. In 2011, Rasoulof’s film “Goodbye” won an award at Cannes, but he was not allowed to travel to France to accept it.

Cannes sharply condemned the arrests of the three filmmakers and “the wave of repression that is apparently going on in Iran against its artists.”

PEN America, a literary and freedom of speech organization, said their detention marked a “healthy violation of their human right to freedom of expression and expression.”

Several foreigners have also landed in Iranian prisons in recent weeks, including two French citizens, a Swedish tourist, a Polish scientist and others, which has raised concerns that Iran is trying to use them as bargaining chips in negotiations.

It is a tactic that Iran has used in the past, including in 2014 when the authorities arrested Washington Post reporter Jason Rezaian. He was released a year and a half later in a prisoner exchange with the United States when the landmark nuclear deal entered into force.

On Monday, the family of a Belgian humanitarian worker detained in Iran, Olivier Vandecasteele, appealed to Brussels to do “everything” to secure his release from Evin prison. They said he was arrested in late February after working for more than six years in Iran to help its Afghan migrant community.

The Belgian Foreign Ministry told the Associated Press on Tuesday that it had asked Iran for his release on “several occasions” and still had “no information on the reasons for his arrest.” It said the government gave him consular assistance.