Sweden has historically been seen as Europe’s most welcoming country to refugees, but observers say that changed in 2015 when the government decided to close its borders.

The election in September of a new government led by the far-right Sweden Democrats has further tightened migration policy.

Prime Minister Ulf Kristersson’s Moderate Party, the Liberals and the Christian Democrats form Sweden’s new government coalition. But observers say the Sweden Democrats, who have neo-Nazi roots and won the largest number of parliamentary seats, have enormous influence over the coalition and set far-reaching policies on migration and other key issues.

Observers say the Sweden Democrats have further stoked anti-immigrant sentiment over the rising violence, some of which occurred in immigrant communities. 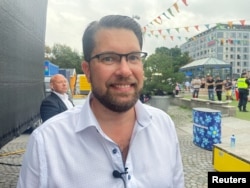 FIL – Sweden Democrats leader Jimmie Åkesson is pictured after a political meeting in Stockholm on August 19, 2022. His right-wing party is not part of the ruling coalition but won the largest number of parliamentary seats in the September election and has enormous influence over the ruling coalition. coalition.

Rights advocates criticize an agreement the coalition and the Sweden Democrats reached called the Tido Agreement, which gives the Sweden Democrats a powerful influence in the design of new laws. The agreement proposes a drastic reduction in the quota of refugees coming to Sweden, from 5,000 per year to just 900; consideration of an end to the system of permanent residence permits; and the possible return of people who “have not been integrated.”

It also tightens the requirements for Swedish citizenship and reduces the right to family reunification to the minimum requirement set at EU level.

John Stauffer, legal director and deputy executive director of the Stockholm-based Civil Rights Defenders organization, says the Tido agreement runs counter to the human rights Sweden is bound by by focusing on “harsher punitive measures, undermining the rule of law and making it more difficult to be a refugee or asylum seekers, he told The Local, an online publication.

He says the deal’s proposals should be challenged, including stop-and-frisk zones, easier surveillance, eliminating benefits for newly arrived immigrants and detaining asylum seekers while their asylum applications are processed, among other things.

Swedish migration expert Anna Lundberg, a professor of legal sociology at nearby Lund University, told VOA that the Tido agreement is not a legally binding document and that it is unreasonable to implement these proposals within given time frames.

“It’s easy to say you should aim for the EU minimum level,” she said, “but it’s not so clear what that minimum level actually means. … I guess the government is also interested in considering knowledge about how legislation work in practice, if they want to achieve impact with their legislative changes. In that case, thorough work is needed to get to the root of the problems they want to solve.”

Law-abiding Afghan refugees in Malmö, who have suffered religious persecution at home and in neighboring Iran, told VOA they felt particularly vulnerable to the proposals because they cannot return to either country, where they would likely face death at the hands of the Taliban and Islam. Ruler of the Republic.

“I can understand their concern,” Lundberg said. “Young people who have sought protection in Sweden without their guardians have been hit very hard by the restrictive changes in both law and law enforcement after 2015. Now that the new government is talking about a paradigm shift, I assume they want to clean up through collective legalization programs so that these young people can make a life for themselves.”

Rights advocates point out that it is not Afghan youth who are involved in gun violence and gang crime in Sweden, but such incidents may involve second or third generation migrants. They claim that arguments for tougher migrant controls are used by the far-right Sweden Democrats to distort perceptions.